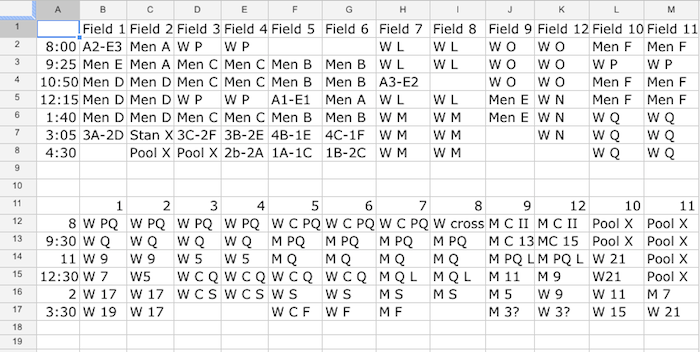 I spoke with Benji Heywood about how often (and at each level) teams play 3, 4, or 5 games in a row, since UK and European tournaments have very different practices and rules. Here's my email response--\n\nOur youth directives are very different. We have much stricter standards for youth events, see: USA Ultimate Youth Formats Guidelines . I was involved in drafting those guidelines, and I can help you interpret some of the more oddly-phrased requirements there.

Mens Centex has traditionally been a grueling tournament with 4 pools of 6, 5 games straight (to 13) on Saturday and 3 (to 15) on Sunday. Most tournaments try to avoid 5 games in a day (I advocate a 4 game max per day in my article). Middle to high level college teams take rosters of 20-30 players because tournament play is brutal and exhausting. This is also part of why USAU College Championships have so many upsets - teams with a strong 7-10 players can do much better playing 2 games a day, even against 30-man squads of fit players.
3 in a row is common at any tournament at any level (with the exception of HS championship events). 4 in a row is more of a hardship, and there is usually a bye if teams play 4 games in a day, but some teams get the last round or first round bye, which means 4 in a row. But those teams also prefer the first or last round bye. In 12-team tournaments with two pools of 6 (increasingly common), we usually see four games on Saturday per team, then everyone plays 1st round Sunday and then in 3 4-team brackets, for a total of 7 games.
Because travel costs are so great, I think TDs feel pressure to pack in 7-8 games per team per tournament, and on weekends because of school and jobs. That means 3-4 games each day, and when there are 5 or fewer games in a weekend, it's not worth the money to go to that tournament over a tournament that promises 7 games.
Ryan Thompson started playing ultimate at Columbia High School at age 13, before playing five years for Stanford Bloodthirsty. Ryan's first TD experience was the Delaware Valley Youth League finals in fall 2007 (and 2008), before helping Cultimate with Stanford Invite from 2008-2010, running Stanford Open in 2010 and 2011, and running Stanford Invite in 2011. Ryan currently lives in Washington, DC while playing for Philly Southpaw and coaching Georgetown University.
Related article: Benji Heywood's TD Tuesdays post on scheduling
Actions
Follow us